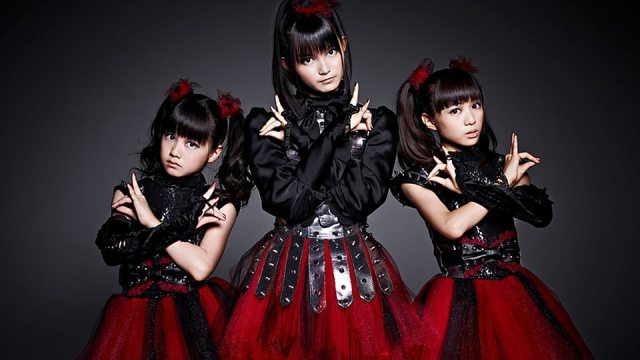 I talk a lot about my love for K-Pop but I never really mention J-Pop. That’s because compared to K-Pop I don’t listen to anywhere near as much J-Pop but I am a massive fan of BabyMetal – I’m not sure if they count as J-Pop but that’s not the point. I wanted to write a list of my top ten favourite BabyMetal songs so here goes nothing!

This song brought quite a bit of attention to BabyMetal, a bunch of Western artists were talking about this song and they ended up featuring in ‘Kerrang!’ magazine quite a bit. And it’s a good song, I love it but it’s definitely not their best song. I’m going to be honest and say I was a bit disappointed when they first released this song, I felt like after their debut album it was a bit of a let-down but the song did eventually grow on me and now I love it!

9. Tales of the Destinies

I put the ‘Metal Resistance’ album onto my phone and started listening to the songs pretty much the minute I got home. Funny story, I caught the bus home from town and chilled in my room before realising that day was the day of ‘Metal Resistance’s release so I had to catch the bus back up town to buy the album. Anyway, I wasn’t too impressed the first time I heard the full album. Like, the songs were okay but they weren’t as good compared to their debut album.

The songs did quickly grow on me and this was one of the first ones I started to like. I think it’s because they used the guitar riff from ‘The One’ so I gave it a go and even though it’s a bit strange I ended up really liking this one!

Su’s solos are absolutely amazing, I also love ‘Akatsuki’ but I think I prefer ‘Amore’ just a little bit more. It’s an amazing song and I’ve always said I wanted to see it live someday but apparently she did sing it at the Wembley Arena show? I’m pretty sure I have a video of it? Either way, I didn’t appreciate it enough at the time because they dropped their ‘Metal Resistance’ album just one day before the Wembley show so I didn’t know enough of their new songs to fully appreciate them! BabyMetal need to come back so I can hear Su sing Amore and appreciate it more.

I actually don’t know if ‘line!’ is the official title for this song but whatever, this song is amazing. A lot of people don’t like the changing genres thing how they switch from metal to rap but that’s what makes me love the song so much. It always puts me in a good mood and I love everything about it.

Black BabyMetal are a sub-unit made up of Moa-Metal and Yui-Metal, the two younger members and I love this song so much. Black BabyMetal have a few fun songs but this one is definitely my favourite of theirs. I’m so sad they didn’t sing it at Wembley and that they went for ‘Song 4’ instead but maybe they’re a little embarrassed to sing it now considering they’re both eighteen and the song is about begging your Dad to buy you things. Or maybe they just happened to not pick it for the Wembley show, I don’t know. Either way it’s a great song and another one I wanna see live one day!

5. From Dusk Till Dawn

This song is amazing, it used to be my favourite but I think I listened to it one too many times just like ‘Amore’. But it’s definitely still high on my list of favourite BabyMetal songs because I think it’s just honestly so good. I don’t actually know what the songs about but I still think it’s great!

This is another up-beat song that never fails to put me in a good mood. I think this was the first BabyMetal song but I might be mistaken. You can see the difference in the outfits they wore during this song and the types of outfits they wear now. I love this song, I think it’s amazing and it always helps to put me into a good mood.

The obvious BabyMetal song, the first one I ever heard and I’m sure most people ever heard. I loved this song from first listen, I thought it was amazing. I remember first listening to it in college with Jess and I started singing it for the rest of the day, to which Becca sighed and said “I quite like this song and now you’re going to ruin it for me.” I’m sure I did ruin it, sorry pal! Either way I love this song and I’m glad it introduced me to BabyMetal!

2. The One (English Version)

Originally I didn’t like the English version – I’d grown used to the Japanese-English version that was used in the music video and I didn’t like listening to it in English. I can’t remember what made me listen to the English one more but now I’m used to it I actually prefer it. When I first heard the song I didn’t love it because I remembered Su had compared it to ‘Road of Resistance’ and I really didn’t think it compared. But now it’s one of my favourites and I can see what she means. I love this song so much.

I don’t think this will ever stop being my favourite song by them. If I ever need some like inspiration, motivation or just cheering up this is the first song I stick on. It was my top track from my running playlist because it always motivated me to keep running. This song is absolutely amazing and no BabyMetal track will ever top it in the future. I imagine this is most fans favourite song but for good reason! This song helps me a lot through rough times and I don’t know what I’d do without it.

So there we go, there are my top ten favourite BabyMetal songs! Feel free to leave a comment with your favourites!